Tiny Homes and a Small House – Learn the Surprising Differences 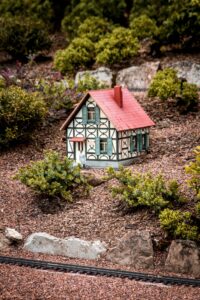 In some arenas, tiny homes and small houses are classified as one in the same. But in some areas, they are actually two very different housing concepts. One of the reasons for this could be the fact that the square footage of a tiny home and a small house could overlap. For example, there are some tiny homes that have been built up to 1000 square feet, while small houses begin around 800 square feet.

So, what really are the differences between an actual tiny home and small houses?

What is a small house?

As anyone who has been interested in purchasing real estate over the past few decades may be aware of, the average size of a traditional home keeps growing. Today the average traditional home is somewhere around 2,500 square feet. In many cases, homes with significantly less square footage are considered a small home. To some people’s surprise however, there are still plenty of homes being built with much less square footage than the average 2,500 or so square feet. These are classified as small homes.

These homes are built just as any traditional home would be built with the traditional means of plumbing, heating and air-conditioning, standard windows, and pretty much any other standard size item you expect to see in a larger and more main stream sized home, but they just have less livable square footage than what is considered the current norm. Some of these homes are built with a significant low amount of square footage from 600 to 800 square feet causing some people to classify them as a tiny home because some tiny homes are also the same size. The difference here however is that a small home is just a smaller version of an actual traditionally built home.

What is a tiny home?

A tiny house is a bit different than a small house in that it is not at all really a traditional home. Every focus of a tiny house is built upon actually being as minimal in size as possible. The biggest drive behind the tiny house movement is actually a minimalist lifestyle with less stuff, therefore creating the need for less space and a more simplistic and cheaper way of living.

Tiny homes can either be mobile or permanently fixed to the foundation. Most popular are the mobile types of tiny houses as several of those who own them want to be able to more easily move them from location to location. Recently there has been an uptick in the popularity of placing a tiny house in a backyard of the land around a traditional home.

Tiny homes, though they overlap in the same square footage sizes as some small homes are much smaller than small homes. Tiny houses can be as minimal as just square feet. Most tiny homes are built with an off- grid focus, and therefore you will see other creative means of creating the ability to have plumbing and heating within a tiny home.

For more information about tiny homes in the Puget Sound area, please contact us anytime over the phone or with an email, check out our website, or come by and see our products in person. We are located in North Snohomish County in the North Marysville/Arlington/ Smokey Point area.

More on Tiny Homes in the Pacific Northwest